The sandstone features several major fault lines in its surface running roughly on a north/south axis, some large enough to be named e.g. Downholland fault, Croxteth fault. The following chart was obtained from the Environment Agency –

A number of seismic surveys of the area have been undertaken over the years, showing cross sections of the bedrock.  These have shown that the Formby basin contains a network of vertical and inter-connecting faults running to a depth of 3,000 metres (two miles). 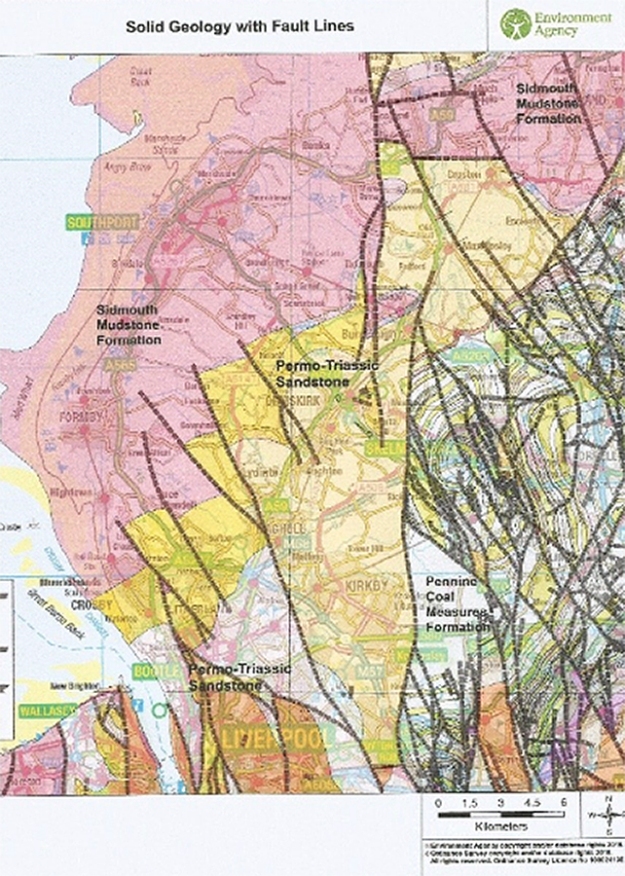 It is a matter of public record that a fracking operator called Cuadrilla met problems with this process with its well at Preese Hall near Blackpool in 2011.  Its lubrication of a fault 200 metres from its well bore, by the unintended spread of fracking fluid below ground, caused two small earthquakes and fifty minor earth tremors.  Cuadrilla’s operations then had to be shut down.

Most fracking wells are shut down anyway after two or three years (and new shafts drilled) because the harvest drops off significantly.  During well operation only about 40% of the fracking fluid flows back to the surface, and presents a disposal problem for an operator.  Once the fracking stops, and the well is capped, formation pressure will still try to force the upward migration of contaminated flowback and fugitive emissions.